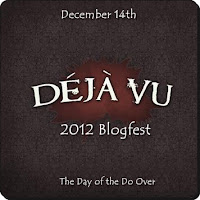 DL Hammons from Cruising Altitude 2.0 is hosting the Deja Vu Blogfest today! Click HERE if you want to join or read some of the other great entries! It's easy! Re-post a post from 2012! Maybe it's your favorite, maybe it never got noticed, maybe it's hilarious! Let's see it again!

Sometimes we write the most wonderful, amazingly insightful, thought inspiring blog posts in the whole universe and due to any number of reasons they are completely missed.

This isn't one of them.

I loved this post from the April Blogging from A to Z challenge about my favorite show, Survivor, but, by the letter 'S' comments were getting scarce and everyone was getting a little alphabet tired.

My husband and I have watched every episode of Survivor ever made. We have both talked about going on the show but have never joined.

I just don't like people and I might kill some of the other contestants if they annoy me too much and bury them in the jungle or weigh them down with coconuts and sink them in the ocean.

But, enough about me, here comes Stormy!

Thanks to the awesome suggestion from K., you know who you are :), I was a guest on the CBS show Survivor*!


Blogging from A to Z!

Have a great weekend everyone! I have to go decorate the naked tree!

Anyone got cool plans?
Rambled by Heather M. Gardner at 8:54 AM