Sarah Foster is hosting The Muse Party Blogfest! Bring your Muse, answer some fun questions on your blog, and get the party started!! Check out her blog, The Faux Fountain Pen, for more info and the list of participants. 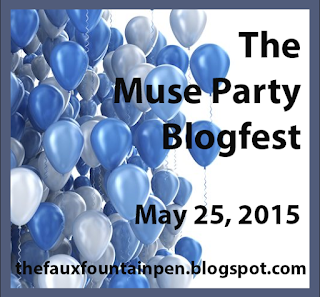 Happy Blogiversary, Sarah! Thanks for having a fun blogfest party!


1. Who is your muse (or character)? Tell us a little bit about him/her and why you brought them.


My muse has a name. Nigel Carruthers. (Lovingly borrowed from Billy Connolly) He’s British. Snooty. Arrogant. Fussy. He sounds like Ian McKellan.  When he’s angry. Which is most of the time. When he’s on, he’s really on. Other times, he’s just drinking pints and telling me where to stick it.


2. What are you guys wearing? Dressing up or keeping it casual?


I’m a jeans and T-shirt kind of gal. However Nigel is always properly dressed for any occasion.


3. It's a potluck! Did you bring something yummy?


Always bring something for the host. I’m bringing bunches and bunches of celery. Nigel has brought his own libations. Cause he’s rude.


4. Open bar! What are you both drinking (booze or otherwise)?


I’m going to need coffee. Lots and lots of coffee.


Funny. This question really puts the two of us in perspective. I’m a wallflower to the extreme. I do like to people watch, but eventually I’ll take out my book and forget about everyone else. Nigel will party all day and all night and all week!


6. What song(s) will you and your muse sing for karaoke?


I campaigned for Don’t Stop Believin’ from Journey, but Nigel wants to sing Maxwell’s Silver Hammer from The Beatles.


My favorite party game is ‘Let’s watch the clock!’ I hope that doesn’t sound rude, but I’m not good with people. Nigel’s one of those guys that are good at everything, no matter what game you pull out he’s mastered it.


8. Which one of you is more likely to end up dancing on a table top?


This one I can honestly say, neither. Nigel would never embarrass himself, even as inebriated as he gets.


9. Has your muse been a good date and would you ever hang out with them again?


Nigel arrived with me and he’s leaving with someone else. He’s not to be trusted with that accent. But, he has great stories to share. Sometimes he’s so intense he scorches your skin. Sometimes he’s so damaged you just want to hold him until the pain goes away.  Sometimes he’s so funny, you can’t even breathe. So, yeah, I would definitely hang out with him more, given the chance.

Rambled by Heather M. Gardner at 8:22 AM