What's this? New books? Yes! And, they look great! Make sure you read all the way to the bottom of this post where you'll find an awesome giveaway!

Welcome back to the blog ... Christine Rains!


What? You don't think smoking hot when I mention ghosts? Clearly, you're not watching the right movies or television shows.


Yes, most of the time Hollywood gives us the buxom scream queens and ripped heroes. But the dead are beautiful too. If you think a moment, there have been some gorgeous ghosts haunting your screens.

2. Nina Young as the Grey Lady in Harry Potter. Beautiful and mysterious, but don't tick her off!


3. Patrick Swayze in Ghost. Too soon?


4. The cast of Dead Like Me. One of my favorite television series of all time. Okay, so they're not phantoms who haunt places, but they're Reapers, spirits who collect newly dead souls. Death never looked so hot!

5. Spike after he died on Buffy and shifted over to Angel. First he was undead, then he was dead, and then undead again. He looked incredibly hot for someone who kept dying!


6. Possessed Sigourney Weaver in Ghostbusters. I think every guy wanted to be a ghostbuster are seeing that movie just to bust a ghost like her!

8. Ryan Reynolds in R.I.P.D. I was excited when this movie came out because I liked the concept, but it wasn't that entertaining. At least Ryan made a good-looking ghost!


9. Alexandra Breckenridge as Moira O'Hara in American Horror Story (2011). A sexy spirit in a french maid outfit? I don't need to say anything more.

Who are your favorite sexy ghosts?

Thank you for coming by today, Christine! This looks like a great series! Best of luck and best wishes! 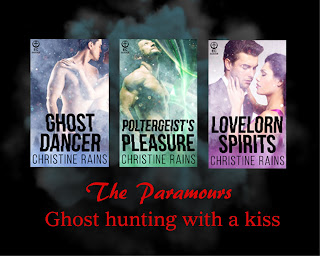 Christine is having a giveaway!

a Rafflecopter giveaway
Rambled by Heather M. Gardner at 7:56 AM