Got Green Blogfest 2.0 - I was an Irish Band Groupie. 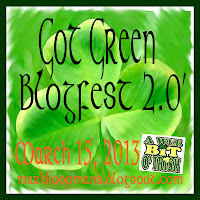 What Irish story will you be sharing today?

Click on the link above to read all the great stories!

This is more of a magical Irish journey story than a St. Patrick’s story. I’m sure you’ll agree, it’s more interesting than corned beef.

Many years ago, shortly after high school, my girlfriend and I went on a grand adventure.

We went to see this cool band at a local theater and opening for them was a new band from Ireland. We had never heard of them but their music was awesome and it didn’t hurt that they were pretty cute.

After the show a few of them came out to the bar to have a drink or two. My girlfriend, who is much braver than I, went up to them to tell them how much we enjoyed the show.

The conversation continued, over beer, and they told us about their tour dates and asked if we would be interested in seeing them play again.

Needless to say…we did. First stop was a club in NYC, which was a blast. By the way, drinking Guinness with real Irish men, it’s a sporting event.

After we recovered, we realized that we were having a great time and decided to really follow the band around. We took time off from work and packed the car.

We followed them to New Jersey, Pennsylvania, West Virginia and Virginia. We ate with them, drank with them (a lot), and even stayed in the same hotels. We became groupies / roadies. We were on the guest list at each event and had our own VIP passes.

We had to go home after Virginia and they traveled to the West Coast for more tour dates. We were only able to see them in PA and NY a few more times before they headed home to Ireland and we never saw them in person again.

For us, it was an amazing adventure, a trip of a lifetime. One I will never forget about but, to be honest, I don’t recall too many of the details anymore.

That's my story and I'm stickin' to it.

Well, I can, cause every word is true!